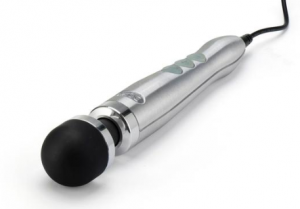 As some of you might know, I travel a bit for work. And if I travel for play, I usually take an entire suitcase of toys with me. So space and weight is always a factor when it comes to choose which toy to take with me. And sadly, sometimes due to that a toy has to stay at home.

Last year, I reviewed the Doxy Die Cast, the best wand massager I have come across yet. Yes, even better than the original Hitachi Magic Wand. In my playroom, it is put to very good use because it is the favorite toy of some of my regulars. Almost every guest, I use the Die Cast on, wants one afterwards. BUT: It is rather large and heavy, having a large external power adapter to drive the intense vibrations. Because of that, especially when I am flying or traveling to Berlin for a play weekend, the limited capacity of my ONE carry-on toy suitcase is simply too small. So every other trip I think “Wouldn’t it be nice to have a massager now?” 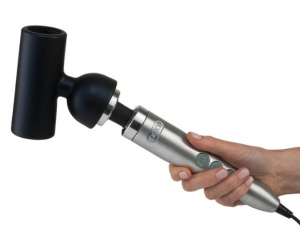 In late 2017 Doxy introduced a smaller, lighter but still die cast case wand massager: The No 3. They seem to have hit a spot with a more portable yet powerful massager because ever since it has been in the “Top 5 Requested Reviews”.

Initially most gay kinkster who wrote to me were skeptical about the No 3 because the more nimble design meant a smaller head which could not accommodate attachments like a masturbator sleeve. As much as that was inconvenient, I did not really care because 40% of the time when I am using my Doxy, it is for massaging tight muscles (and I do not mean the penis!). And on the road for the other 60%, a small head stimulating the taint or the frenulum would have been enough for me. 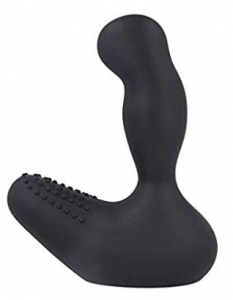 The Nexus Prostate Massageer Attachment for the Doxy No 3

But this year Doxy teamed out with Nexus, most prominently know for their prostate toys, and made silicone attachments for the No 3. Unlike with the traditional massagers you do not pull them over the head but unscrew the massager’s head and put the attachment on. As a vigorous stroker a jerking-off sleeve which does not come off when moving up and down the shaft is a great innovation. Thinking about when using my Doxy Die Cast in the playroom on the dick and adding a No 3 with Nexus’ prostate massager attachments leave to evil fantasies. So there are many good reasons why I would want my stockings stuffed with the Doxy No 3 and both male Nexus attachments.[i]

The Doxy No 3 costs £129 and is only available in a nice matt silver. The Nexus masturbator sleeve and prostate massager both costs £35.