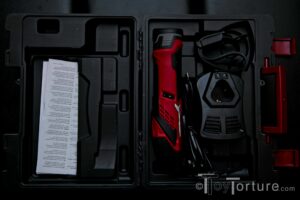 The Slubb along with the Power Tool sold in the Package

The Slubb Masturbator is an attachment for oscillation power tools like the Fein MultiMaster. It is attached to the tool using a powder-coated piece of steel plate. On the open end a rhombus with recesses on the corners and a circle of twelve squares is punched out. This enables the Slubb to be attached to a wide variety of oscillation power tools. My testees and I have tried it on devices from Bosch, Fein and Einhell (more about that below) and it worked well on all of them. On their website, Slubb explicitly excluded the Fein SuperCut from the compatibility list and we can confirm that!

The steel connector is attached to a sturdy, industry-strength polymer case designed to withstand the strong vibrations even as the material ages. I talked to a friend of mine in the manufacturing industry and he assured me that the chosen Ultramid A3K PA66 is one of the best choices for this application. He also offered to put the housing through an testing marathon but this would have started with destroying my Slubb so I am taking his word that the material is good enough for this particular purpose. 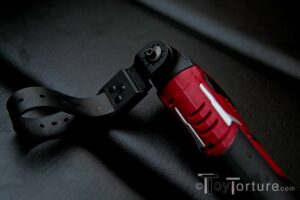 Inside the case a 310mm long and 30mm wide piece of industrial SBR rubber is tightly riveted onto the steel plate. The rubber strap is threaded through a loop at the back of the case. At its bottom there are two mushroom-shaped pins. The strap length is adjusted by pushing the pins through the strap’s holes. There are 16 of those and the two pins are one hole apart so the maximum circumference of the rubber loop is 220mm which should be enough even for well-endowed members of the kink community. But I guess if you require it, the guys at Slubb can custom make a larger version for you.

While you can purchase the Slubb separately if you already own an oscillation power tool that you want to expose to the environmental challenge of the dungeon like lube, they also offer a package together with the Einhell TE-MG 12 Li. The is a middle of the road battery powered oscillation tool with a 3° oscillation angle and a theoretically oscillation frequency between 5,000 and 17*,000 oscillations per minute. While usually being a quality freak who lives by “more is better because you never know when you need a power reserve”, I can assure you, you do not need a more powerful tool with a greater oscillation angle. The guys as Slubb actually “limit” the power units output at about 8,000 oscillations per minute but driving a screw into the rotary control (sometimes the simplest solutions are the best). I have taken the screw out and tested the higher settings. Most subs found the setting the higher settings unpleasurable and painful. Also, more powerful with stronger battery means heavier. At 830g ready to go, the Slubb on the TE-MG 12 Li is already heavier than all the massage wands I have come across. 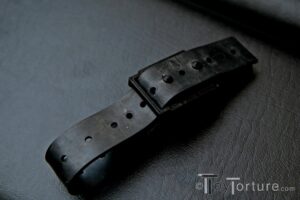 Detail of how the Rubber Strap is attached to the body

The power unit is battery powered so you can easily move around with it. The battery takes around an hour to completely charge and also lasts for about an hour, depending on the intensity setting. It is interchangeable, so if you buy a spare battery, one can charge while the other is in action.

Since it is a professional power tool, it emits noise up to 79db which is probably the loudest toy in any given playroom. To be frank, this is annoying – and all the more reason to take you sub’s sense away by plugging his ears and focusing his attention to the stimulation on his dick.

The Slubb pack comes in a sturdy plastic carrying case without any branding, either of Slubb or Einhell. This is actually a bit of a problem because I do not know how but I always manage to open the case upside down… A Slubb branding (with a sticker) on top would have been great (and as a professional marketer I see a missed branding opportunity). Inside the case is the Slubb, the TE-MG 12 Li, the battery, the charger and a hex key to mount the Slubb onto the machine. 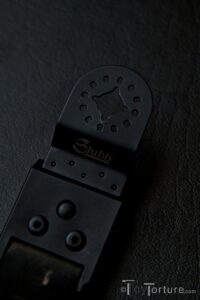 Detail of the Connector

What is not in the pack are the usual attachments a oscillation power tool comes with like saw blades, grinding plates or scrapers, etc. In Germany the TE-MG 12 Li currently retails for about 60€. Considering the price of the Slubb itself, it is cheaper to buy the unit separately and the Slubb separately. This way, you do not only save money but have the right tools at hand if you ever need to replace a tile or saw a hole in the back of your kitchen cabinets to install piping.

The handling of the Slubb is easy. Once it is attached to the power unit, adjust the loop that is it one hole larger than the circumference of the dick, apply ample silicone lube on the rubber strap and the dick and start the engines. There is no specific place where to apply the Slubb. The sensation is felt most strongly on the glans/ frenulum but moving up and down the shaft has its own interesting sensation. The more you get up the shaft, the stronger the vibrations are felt.

I sent the Slubb to two friends who suffer from erectile dysfunction. Both were able to reach orgasms with the Slubb, unlike with massager sleeve which require a hard dick start with. One of the two talked with his doctor about the Slubb because he was surprised by the effect. It turns out that vibration can help people effect by erectile dysfunction but there is no guarantee and he was lucky.

This effect was also observed by a milking top: He continued the stimulation after his sub has cum and milked one consecutive orgasm out of him after another. The stimulation is strong enough to usually get men to come quickly so he used the Slubb for quick semen extraction which worked better than a Venus of a Doxy with an attachment. Speaking of wand massagers (attachments): A great feat of the Slubb is that sits tightly and securely on the machine! Regardless how vigorously you move the loop up and down the dick, the simulation will not lose intensity because the attachment is coming off. 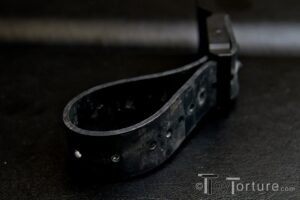 Detail of the Rubber Strap that goes around the Dick

The edges of the rubber strap are not deburred which is a controversial topic among my testees. Compared to other industrial rubber (like the one used on most rubber restraints) the kind used on the Slubb is considerably softer. Even over extended (continuous) usage, there was no chaffing on the tested dicks. But some found the firm edges uncomfortable, other enjoyed coarser feeling because it made the stimulation more intense. If you find the edges too sharp, you can easily deburr them on your own using a knife.

The Slubb should only be used with silicone lube for two reasons. First, silicone lube lasts longer so you do not have to relube ever 3 to 5 minutes as I tested with water-based lube. Second, the silicone oil in the lube maintains the rubber.