The design of this toy is a standard single tail leather whip one with an overall length of 63cm. At the bottom there is a 17cm long grip onto which a 13cm long loop is attached. There are knots at both ends of the 12cm long and 2.5cm thick grip section making it secure to hold onto even with large hands. Out of the grip comes the 46cm long tail which tapers from 27mm to 11mm until ending into a 40x18mm large tip. 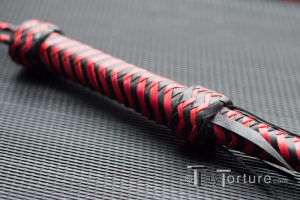 Detail of the Handle

The core of the Uberkinky Silicone Core Whip is made out of strong and sturdy silicone. It is covered with stiff yet flexible red and black leather in a herringbone pattern.

This is one of four Silicone Core Whips Uberkinky recently introduced. There is also a 94cm one with a thickened tail eng and a five foot and five foot five inches “classic” single tail with a whistler style cracker. While these are great toys for large play spaces most kinksters tend to play in their bedroom or have – like me – a rather confined play space at home. So I chose the shortest of the four leather whips. The compact form factor of this whip enables intimate play. It is short enough to hit a sub’s ass who is strapped to a whipping bench and still have body contact. 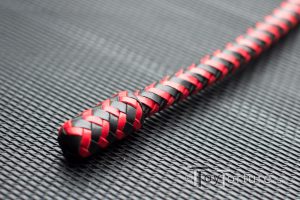 Detail of the Thickened Tip

The throwing of the whip takes a little bit to get used to. While the leather covering the silicone core can be broken in a bit to fit your individual whipping style the core despite being flexible has a certain preferred direction it wants to be thrown. This is even more intensified by the thickened tip which pulls the tail once thrown. Both these factors make this whip especially good for beginners because the core guides you and allows for pretty accurate targeting after a short time. Whip masters who are used to break in their whips will have to adjust a bit. Despite the thickened tip the Uberkinky Silicone Core Whip is well balanced allowing for longtime whipping without tiring out the wrist. 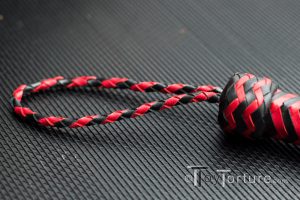 Detail of the Holding Lopp

The impact sensation can be best described as a medium-severe sting with a thuddy afterglow. The impact of the thickened end stings quite a bit but not nearly as much as a cracker of a leather whip would. After the sting spike after the impact a thuddy sensation spreads out from the impact point and takes some time to fade away depending on the impact’s force. The marks this leather whip is leaving are bruises rather than welts and it never broke the skin during the testing.

Like all leather whips cleaning is a bit difficult. As always I recommend letting it hang in the sun for a week and let the UV radiation take care of the germs.