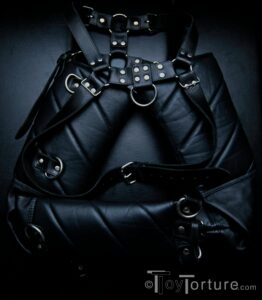 Mr S calls this toy “Bondage Sleeves” but I  would find the term “Straitjacket Sleeves” more appropriate because that is what this toy is: The sleeves of the Vector Straitjacket I reviewed last week combined with a harness to tie them to the body.

The harness looks like a hybrid of a Bulldog and a Y harness. In the front there is a 14cm long horizontal piece of leather with a D-ring in the middle. The O-rings left and right of this leather piece is housing each a belt going over the shoulder and a belt going under the shoulder around the back. Connecting both belts using the roller buckle which is riveted on one of them will fetter the harness to the sub’s body. The belts going over the shoulder connect to an O-ring by two roller buckles riveted with leather loops to it. A 6cm long vertical piece of leather connects this O-ring to another one. This O-ring is the anchor point for the two belts onto which the sleeves are attached. 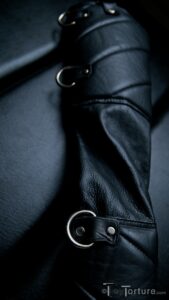 Detail of the 3 D-rings on the Sleeves‘ Side

The sleeves are basically like the ones on the Vector Padded Straitjacket from Mr S: Unlined leather sleeves with thick foam padding sown on the upper and lower arm and an unpadded elbow to allow the arm to bend. On the sides of each sleeve there are three D-ring riveted to the body using the same soft and sturdy bridle leather the belts are made out of. The bottom of the sleeve looks like his big brother: Left and right D-rings, roller buckle in the middle to connect both them. They have an internal length of 76cm and a circumference of 65cm so even beefy bodybuilders should fit. Speaking of fit: Unlike last week’s straitjacket, this is a one-size-fits-all piece of gear. But the belt going around the back has a total length of 110cm, the belts to connect the sleeves with the harness can add another 25cm to the internal length so there is plenty of space for beefy and thick bottom boys wearing this piece of bondage gear. This adjustability is a true feat for tops that play with subs of different body types! 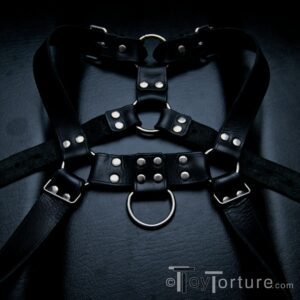 The Harness for Fettering the Sleeves to the Body

The Vector Sleeves come with the same amount of straps as the Vector Straitjacket: A 76cm long one with only holes to connect the sleeves, 6 traditional belts with roller buckles (2x 85cm and 4x 60cm) and a 4x 60cm and a 23cm long piece with roller buckles on both ends. This allows for the same two basic bondage layouts: Either use a belt to tie both sleeves folded in front of the torso together and connect to the front D-ring or threat a belt through the D-rings at the sleeve’s bottom and tie them around the thighs.

After all this years, I guess I do not have to write too much about the Mr S’ leather quality: Both the garment and the bridle leather is soft, yet sturdy and smells great. 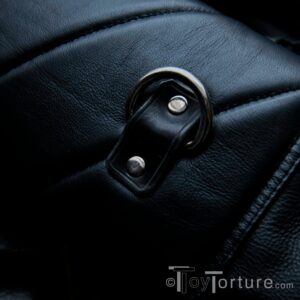 Detail of the D-ring housing

Since the design of this toy is so close to a straitjacket, bondage-wise is almost works like one. When the arms are folded in front of the body and adding the vertical belt for added restrictiveness, the bondage degree is a little bit lower because the belt is only attached to one instead of two D-rings. But luckily a stainless steel cockring can easily be used as a second anchor point. Naturally, also the feeling of leather tightly hugging the torso is not there.

But that is not scenario for which you would buy this piece of bondage gear. If you want that, buy a straitjacket! There are three major scenarios for this toy: First, it is for people who want to show off year gear. Especially at bars or street fares, some tops want their subs to display what they are (not) wearing while still securing them tightly. Related to this scenario are subs who easily overheat. For these people layering up by putting a straitjacket over their gear is not an option. There are even people like a close friend of mine who even when just lying bound in a normally heated room cannot have a long-term bondage scene in a straitjacket because he gets too hot. 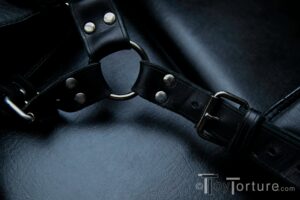 Detail of the Connection Between Harness and Sleeves

Finally and probably most importabtky, there is the (almost) full body access appeal of this toy and personally I fall into this category. While last week I wrote that the Vector Padded Straitjacket is the best straitjacket I have ever played with, I use the Vector Sleeves way more often in scenes! My testees and I had scenes involving sensation play, knife play or even flogging which are usually not associated with the bondage level straitjackets of. There even were some wax play scene though it is only for experienced/ really masochistic subs. In order to limit the chance of wax hitting the leather, the drop distance should be relatively low which means the heat increases dramatically. Naturally, nipple access if way better than on a traditional straitjacket and since there are not straps below the chest, CBT, fucking and fisting works without a problem. There is a final, a bit borderline target audience: Fursuiters into bondage. The plush fursuits are made out of is often so thick would make a separate straitjacket for fursuit bondage necessary (not beginning to talk about the heat problems there…). And I have not even started with fur getting caught in zippers or Velcro. The large body size range these Vector Sleeves cover makes them ideal for capturing anthropomorphic subs. 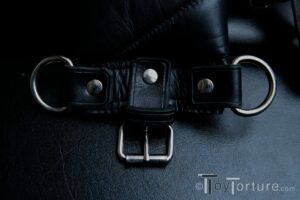 The Sleeve Ends with Roller Buckle and Two D-rings

While its big brother has 19 D-rings, the sleeves “only” have 9. This difference may sound drastic, but 9 are ample in most situations.  Regardless if standing in a bondage frame, tying the sub to a pole or spread eagle on a bed, there are enough anchor points to fetter the arms and upper torso properly. For added bondage, simply thread rope of tensions straps through the O-rings. Though if you need to tie the lower torso, you will need a bondage belt. Since the D-rings are on the outside of the sleeves they can easily be tied tighter to the torso by threading a belt through them.