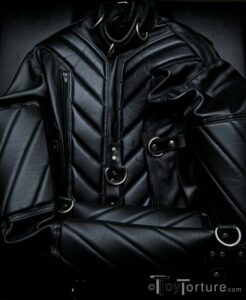 Like all straitjackets the basis of this piece of bondage gear is a unlined leather “jacket” with extra-long, closed sleeves. The jacket opens at the back and is closed using industrial strength Velcro. The frontab, the upper and lower arm are heavily padded with thick panels of v-shaped stitched down, leather covered foam cushions. Left and right of the padding run each a 15cm long lateral zipper (in size M) for nipple access.

To fasten the straitjacket tightly onto the sub’s body, there are 5 bridle leather belts with roller buckles on the back. For added security, there is another belt around the collar and onto the bottom of the jacket two belts are riveted. These go around the thighs and through the crotch. For securing the arms, there are roller buckles at the end of each sleeve. The jacket comes with a 76cm long belt only with holes to connect those two. To keep the arms in place there is a pair of D-rings between the padding on the front. Use one of the additional belts (2x 85cm, 4x 60cm and a 23cm long piece with roller buckles on both ends) that come with the straitjacket to fasten them to the front. At the end of the sleeves there is a D-ring left and right of the roller buckle. When you thread a belt to those two and fasten it around the thigh, the arms can be tied down parallel to the torso. 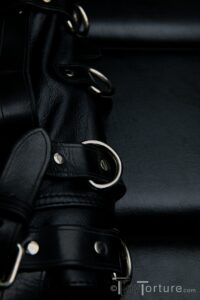 The Array of D-rings on the Side

Speaking of D-rings there are a lot on this straitjacket. Like, really a lot! There are three around the collar, the two in the front, two at the end of each sleeve, three on each side of the jacket. Onto the jacket body is a 6.5cm wide piece of folded garment leather sown. Being thinner it is a bit softer than the jackets unlined leather. So if you thread a belt through the pairs of D-ring on each side, it tightly closes around the body. All D-rings are securely housed under straps of bridle leather, attached to the body using sturdy rivets.

Like all products leaving the workshops from Mr S, the leather is top notch. It is soft, has a beautiful grain, subtle light shiny luster and smells deliciously! Despite all these “cuddly” attributes, the leather is heavy duty and means business! The belts are strong enough to rein in even the strongest sub. 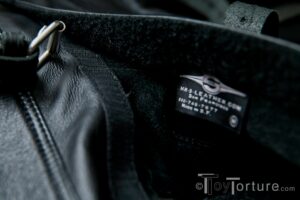 The Velcro Strap for Closing the Straitjacket

Since Mr S manufactures all their gear in-house in San Francisco and has a custom department, you can always literally tailor the straitjacket to your own demands. This starts with simple requests like needing a smaller or larger size or stitching colors and goes over colored leather (a friend got this straitjacket with red leather covering the padding) to complete design modification. I’ve done smaller modification on other toys in the past (had I but world enough for ALL my kinky dreams…) and they are extremely kind and helpful. They put all their expertise and experience into getting you the gear you want. But be prepared to wait a bit for the finished product to arrive. 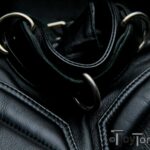 Detail of the Collar with Three D-rings 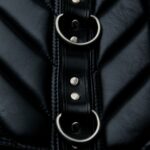 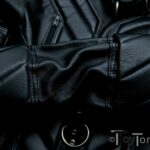 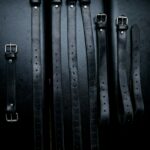 All the Straps that come with the Vector Straitjacket 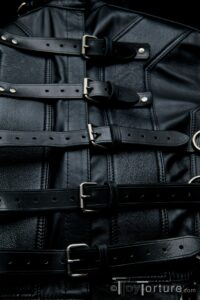 Playing with the Vector Padded Straitjacket

Let’s start out this part of the review with the only big point of discussion among my testees: The way you close the straitjacket. About 60% of the people that played with the Vector straitjacket would have preferred a zipper closure. Closing a zipper gradually increases the level of restriction and a good zipper can take a bit of struggle. So once the jacket is zipped up a bit, the restrictive feeling kicks in. With the strap of Velcro you need a still standing sub to align both sides properly. Don’t get me wrong: The wrong, the Velcro is industrial strength and once closed can absorb a lot of force. But you need a sub to willingly submit to get into this straitjacket. As this is how I play with my subs, the Velcro did not bother me but apparently it is something to think about before choosing this straitjacket. 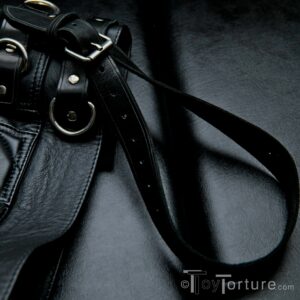 That being said, the Vector Padded Straitjacket passed with flying color! It is actually the best straitjacket I ever played with. The thickness of the leather and the padding strikes the right balance of being comfortable over extended periods of time and intense feeling of bondage. Once all the belts are fastened, the leather wraps tightly around the body. The belts are 35mm wide, so when they are being pulled tight through the roller buckle, the pull force is transferred onto a large body area. Since there are so many belts to close, putting the straitjacket on has a great sense of drama, feeling how the ability to move is taken away while the soft leather hugs the skin increasingly tightly. This makes this straitjacket a treat for every leather fetishist. The thick hide with the massive, stainless steel trims add up to a weight of almost 5kg! Wearing this straitjacket wears you down in a good way. It feels solid, heavy, restricting and that’s what a good piece of heavy body bondage should do. 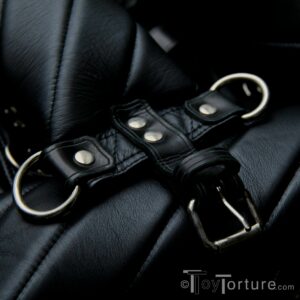 The Sleeve Ends with Roller Buckle and Two D-rings

When you have read other reviews from me, I usually say “More D-rings are better!” But the Vector Padded Straitjackets features a total of 19 D-rings! Yes, I can think of borderline situations where more D-rings would be useful and I have thought “Oh, a D-ring on the shoulder or the elbow would have been nice.” But thus discussion is academic! The many D-rings are enough for almost every bondage situation, regardless if lying down with the arms folded in a sling, tied a spread eagle on a bed, fixed to a pole or in a bondage frame. The strong way the D-rings are attached to the straitjacket comes in handy especially when the sub is standing up. If using strong enough fettering mediums like rope, industrial tension straps or chain, the sub can lean into the D-rings and the straitjacket will support him. 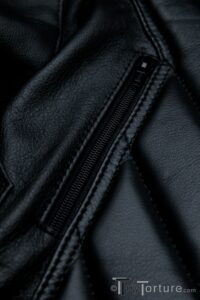 Play access to important body parts is good with the Vector straitjacket. Like all belts, the ones running through the crotch are soft and have been thoroughly deburred. So even fetter the straitjacket onto bare thighs, the leather will not cut into the skin or cause friction burn when moving quickly. So the dick and balls can be carelessness exposed for CBT or a top must not worry about discomfort when fucking or fisting his bound boy. The nipple access is as good as you would expect. Since it is only a straight zipper in a rigid material like leather, the opening extends only so much. In most cases the nipples below were in reach and clamps or even suction cups could be applied easily. But it is definitely too tight for wax play or extended licking and biting. For this kind of play, you need a straitjacket with tit flaps! All that things being said, it is still the padded straitjacket with the best tit access.