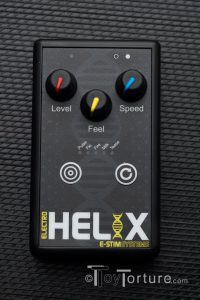 I often get asked “Which is a good and safe e-stim box to start with?” For years E-Stim Systems Series 1 was the most inexpensive of the premium boxes. In March this year they launched the Helix as a replacement. I was very glad when they sent me a review sample for the E-Stim Special to finally be able to bring you a review on the lower end of the price range.

The Helix measures measures 111x67x28mm and thus is still one of the more compact boxes available. The case is made out of a high quality, sturdy black polymer. On the front of the box is the power switch and the output socket for 3.5mm jack.

The top of the box is the control panel. On left there is a small blue LED which fleshes when the box fires. Below are three rotary controls for the intensity level of the stimulation, one to alter the feel and one to alter the speed of the stimulation. Below the controls there are five LEDs which indicate the selected program. Below them there are two buttons: The one on the left is called “Fire”. When you press it in Fire mode an intensity burst is fired. When holding the button down while turning the box on the output level increases significantly. The right button is for shuffling through the programs.

The box is powered by a standard 9V block battery which’s compartment is on the bottom. So if the battery runs out of power you can replace it easily and quickly during the scene. 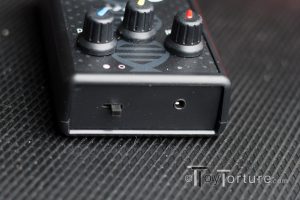 Detail of the Power Button, the Output Socket and the Three Controls

The Helix comes in a high quality and nifty nice black carrying case along with a detailed manual, a lead, four pad electrodes and a battery (For detailed pictures take a look at my unboxing). As all the E-Stim Systems Premium Products the Helix comes with a lifetime warranty.

Playing with the Helix Power Box

To get the Helix play ready push the power button and wait for the short self test which also checks the battery. If less than half the LEDs flash you should replace the battery. Connect the lead to an electrode and the box and attach the electrodes to the sub. Then select your desired mode. The Helix will always start up to the pulse mode. Finally slowly start turning the level control clockwise until the sub starts to feel something. Being an analogue box you can very finely control the box with the rotary controls.

Since the Helix is an analogue box the sensation is silky smooth – if you don’t adjust the level and feel to be otherwise. This makes this box good for beginners because the sharp and almost excruciating sensation of cheaper box drive many people away from e-stim. The five programs cover the basic range of possible e-stim sensations from a light and arousing tingling over milking to extremely challenging pain. And despite the relatively price point the Helix produces enough output to be interesting to experience players, especially in the high intensity mode. 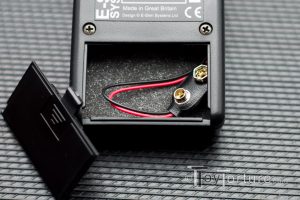 Detail of the Battery Compartment

It is only in the features you realize that it is a beginner’s box: It only has one output channel and not extra inputs like a microphone or motion sensor. But if you just want to get a first glimpse into e-stim or need an additional box with a fire button to control your sub, this box offers great value for an attractive price.

While the pad electrodes of the basic set are good for first dip into e-stim, I recommend investing the £10 more for the Helix Blue which comes with a set of conductive rubber loops (which I consider an e-stim essential as you can read here).