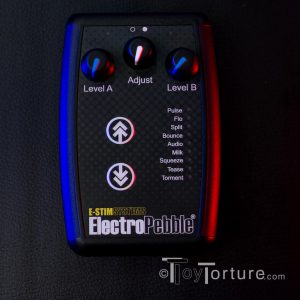 After I reviewed the E-Stim Systems Helix in this year’s E-Stim Special in the spring, I literally got inundated with questions regarding the Pebble. The folks at E-Stim Systems were kind enough to provide me with a review sample so here are my testee panel’s condensed thoughts and experiences with the Pebble.

The Pebbles design is quite distinct for an e-stim power box: With its convex sides it has an almost hand axe like shape which rests really well in the top’s hand. The back, the top and the bottom are made out of the same high quality, sturdy black polymer all E-Stim Systems’ power boxes are made out of. The convex sides are covered in a rubberized soft-touch material for even better grip. The box is 117mm long, 24mm high and measures 78mm at the widest point. The panel at the front side features two 3.5mm sockets and the power switch in the middle. Behind the power switch the microphone is located.

The upper part of the control panel on top of the box is also symmetrically laid out. On the left and on the right are the rotary controls for controlling the intensity of the two channels. Above them is a blue LED which is on when the channel fires. Between the two intensity controls is the “Adjust” rotary control for manipulating the program’s sensation. Below these controls on the left side are two soft-touch buttons labeled with arrows up and down. They are for the program selection. On the right side next to the buttons are the 9 programs names with a blue LED next to them which flashes in a unique pattern for each program (see below). 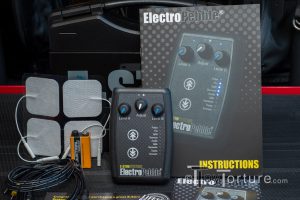 The E-Stim Systems Pebble with the Entire Box Content

The box is powered by a standard 9V block battery which’s compartment is on the bottom. So if the battery runs out of power you can replace it easily and quickly during the scene.

Like all E-Stim Systems Premium Products the Pebbles has a lifetime warranty. It comes like all power boxes in a black carrying case lined with foam. If you cut the foam a bit on your own, there is plenty of space for some basic electrodes. Out of the box the Pebble comes with a detailed manual, a battery, 4 pad electrodes and two 3.5mm jack to 2mm pin plug leads. While I can understand the choice so you can out of the box connect the box to the pad electrode it is still a bit annoying because most E-Stim Systems electrodes are laid out for 4mm banana plugs (for more detailed information of the carrying case’s content, read my unboxing).

Playing with the Pebble Power Box

After turning the box on there is a 4se self-test during which the program LEDs flash after each other from the bottom to the top. Then the LEDs go on according the current battery status. If only half the LEDs are on, you should consider replacing the battery. The Pebble will only start firing a channel when a program is selected by pressing the arrow buttons. After the selection it takes between 2 and 4 seconds until the program is activated. Once the program is activated the 9 LEDs flash in a unique pattern. This is a bit annoying because you have to memorize which pattern is associated with which program in order to figure out which is currently active. 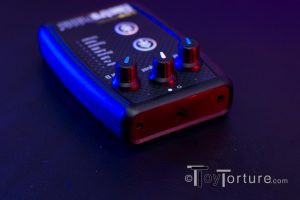 Like the Helix the Pebble is an analogue box so the basic feel is very smooth but depending on the program can become quite stingy. Especially for beginners I recommend staying at the smoother side of the possible sensations because the sting of cheap e-stim units drives most rookies away. Still the Pebble packs enough punch for experienced players. The programs range from the basic (Flo and Pulse) to elaborate ones (Tease & Torment) which leave enough room to explore different play scenarios even for more experienced e-stim doms.

Like almost all build-in microphones of e-stim units it is not that great and sensitive. But the Pebble – unlike its big brother – doesn’t have a microphone line-in. So if you want to use the audio feature, place the power switch directly in front of the audio source for a good and detailed input. 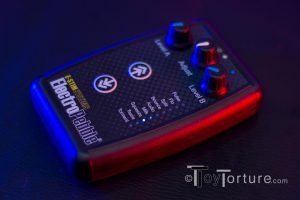 Example of the Flashing Patterns indicating the Selected Program

So, compared to the Helix, where does the Pebble stand? My honest opinion is, there actually is no real reason to buy the Helix when the Pebble is available. With 5 more programs and dual output for just £40 more, the Pebble offers a better value for the money in my opinion. However, if you know that you only like stimulation in one place, like to threat your sub with the “Fire” button usage or are looking for more control over the program the Helix is the box for you. But from my experience, having talked with dozens of people venturing into e-stim, most people enjoy the possibilities of dual channel stimulation. So even if you are starting out in e-stim, I would recommend the Pebble and if you want to dive even deeper into this form of play and want the features described above, buy the Helix as your second box.