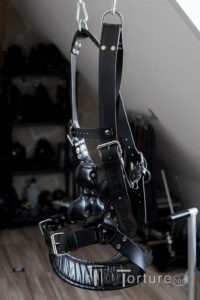 Like with all heavy duty bondage items, the first look should always be on the material and manufacturing quality in order to see if the gear will actually detain a struggling sub. This is even more important with a suspension harness because an equipment failure will not only ruin a scene but can potentially cause injuries!

This Blackjump model is beyond any doubt. All straps are made out of sturdy, 2mm thick and 50mm wide belt leather (except the one across the chest which is 30mm wide). Points with crucial load bearing or extreme kinetic stress either feature double leather layers or four instead of just two rivets. Equally important is the protection of fragile and vulnerable body parts from the stiff leather belts digging in. For this thick and stiff foam under soft leather is used so even under a lot of pressure you do not feel the leather and metal below the padding. The hardware is also supreme: The D-rings are welded and made out of thick steel, the buckles are sturdy roller buckles. 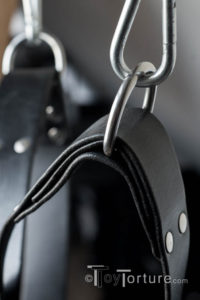 All these ingredients are mixed together into what appears fairly simple design which in the details shows a lot of thought. The torso part is basically two belts with holes on both ends, riveted to an X with one rivet on the back so the angle between the two belts can adjust easily depending on the sub’s body size. To protect collarbone and the shoulders, there are pads which can be attached to the belts with snaps. Though mine have been lost when I have bought this harness from a friend; I need to reorder them again. On the apex of both belts there is a D-ring from which this harness gets suspended. Just above the belt holes in front there is a horizontal strap riveted with a roller buckle to tighten the harness in front of the chest.

Using four buckles, these straps are connected to the piece de resistance of this suspension harness: The roughly bone-shaped, padded pelvic-protection. Since there are no muscles and rarely a thick layer of fat over the pelvis, this body area is very sensitive to abrasions. Because of this it has to be padded, either through a pad (like Mr S does) or through a padded belt (like Fetters does). Blackjump goes further. He extends the padding over the stomach region onto the lower rib cage to also protect this fragile body part. In order to maintain the flexibility and adjustability of the harness, the padding is not only ergonomically shaped, but middle part which goes over the stomach section is with 60mm only 40% as wide as the 140mm wide padding to the pelvis and rib cage. A little drawback of the heavy duty design is that the rivets which connect the belts with the padding are not covered by leather. 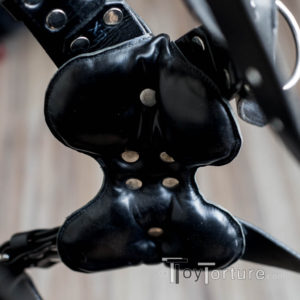 Detail of the Padding Protecting the Pelvis and Rib Cage

The four buckles on the upper end of the padding allow to adjust the harness the bottom’s body size. It is very adjustable; I suspended people from 1,69m to 2,05m and thin twinks to heavier bears with no problem. From my experience with leather as a material and without any guarantee I would say the breaking load of this harness is somewhere between 150kg and 180kg. Below the buckles of the back there is also a D-ring riveted. To my knowledge it is the only fetish suspension who has these D-rings but they are very important when the sub is not flying high (see below). On the bottom there is a belt attached which go around the thigh. To also protect this delicate body area (see below), there a 100mm wide and 350mm long padded “sleigh” running on the strap so regardless of the length adjustment is always cover the back part of the thigh.

At least when my friend bought the harness some 10 years ago, it came with a sturdy suspension bar. On both ends quick links are welded onto the bar, the actually suspension is attached to a triangle ring welded onto the middle. From the quick links 350mm of 6mm wire gauge chain are suspended. The actually harness is suspended using pear clips which the avid reader knows I am not a big fan off. Though since they are never actually opened the sharpness does not really play a role. And at least the ones I have a certified for 230 daN. So I can hardly imagine a strong, heavy muscle bear exceeding the dynamic breaking load of 469kg + safety margin… 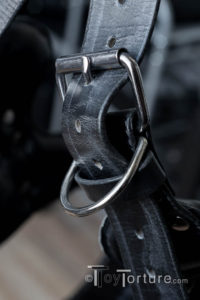 Detail of the Back Buckle with D-ring

Playing with the Suspension Harness

For me suspension bondage, especially in a harness and using rope, is the ultimate form of mindfuck bondage: You are free to move around yet unable to escape. To achieve this level of mindfuck, the sub needs to be suspended so high that his toes can’t touch the ground and his hands can’t touch anything. If you do not have a gymnasium for a playroom, this can be difficult. The extreme situation is my playroom where some subs have to crouch to get into the harness with the suspension bar above them. To still get the sub helpless, put ankle restraints on him and connect them to the D-rings on the back. Depending on the degree of helplessness, fetter the hands using suspension restraints to the suspension bar or to the D-ring to which the thigh belt is connected. In the latter position for added stress, upper arm restraints can be connected to the back D-rings. However, I would not recommend to subject to sub to too much pain in this situation because due to the limited upper arm movement  he can quickly pull something.

The design of the straps and belts allow for maximum accessibility for sensation play over TT and CBT to spanking and even flogging. Particularly fun are e-stim scenes with movement triggered units like the Electrastim Flick Duo or Axis. Once the sub starts to work the pain out, self-sustaining system of constant movement is set in motion which keeps the stimulation coming and coming. Detail of the Suspension Bar and Chains

The feeling of flying can also heighten the sensations of more traditional play like getting fucked or fisted. The free movement of the harness creates a way stronger swinging action than a sling does. While a suspension harness seems like a natural match for a milking machine, I made not the best experience with my Venus 2000. The body’s natural reaction to an intense sensation is flinching, pulling the penis out of the receiver. Just suspending the receiver from the chest strap also proved to instable. I have seen people converting cock sheaths into attachment points for the receiver so this might work. 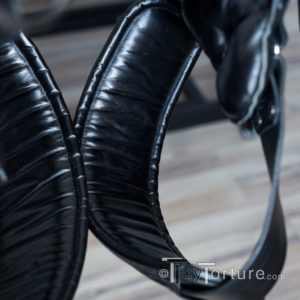 Detail of the Thigh Padding

As hot and fun suspension bondage is, it is also one of the most dangerous forms of bondage due to the risk of suspension trauma. In short suspension bondage is the blood gathering in the legs when being suspended for an extended period of time which will cause a circulatory collapse. Symptoms are sweating, breathlessness, dizziness, feeling sick, dropping blood pressure or numbness. If any of these symptoms occur, get the sub out of the harness but NEVER LAY HIM DOWN! During suspension trauma the heart tries to pump the blood up with ever increasing force. Laying him down would cause the blood to shoot into the torso and brain, basically killing him! This is called rescue death. To prevent this, for the first 20 to 30 minutes, keep the torso in an upright position. A suspension trauma is not a “miner circulation crash” but a serious medical emergency and requires professional help! Drugs which increase blood pressure and/ or open up the blood vessels like poppers can increase the likelihood of suspension trauma. While the thick padding on critical areas makes the appearing of a suspension trauma unlikely, a suspended sub (like all bound subs) should never be left alone and a suspension scene should never go over extended periods of time. Furthermore it is important to talk with the sub about the potential symptoms before a scene so he can draw the top’s attention to problems early enough and does not dismiss them out of mislead will to be obedient.

Speaking of safely suspending someone: If you want to really lift the sub after fettering him in the harness, I highly recommend getting a professional winch for liability reasons. Considering dynamic loads, you should get one with over 1,000kg carrying load!