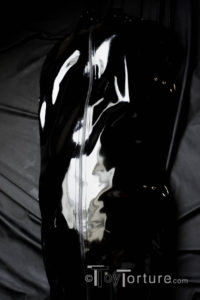 The Torso of the Libidex Rubber Bondage Sleepsack

I do not review many rubber bondage items, mainly because I am maybe a bit too active sub to be contained by them and I am too lazy to clean them. But there are good reasons for some rubber bondage gear and I am more than happy to finally answer one of the most asked bondage gear question in this review.

Like the name of this toy already implies, it is tailored like a bodyfit sleepsack, a tight cocoon to envelop the body in latex. Unlike the sleepsacks made for camping this one only has a standing collar instead of an opening for the whole body. Also, the bottom has a shaped upward facing section for the feet. To get into the sleepsack, there are two zipper options: Either on top or on the bottom of the sleepsack, both running from the collar to the feet from. Mine has the top zipper for three reasons: First, from my experience with other sleepsacks, front access is way more important than rear access when it comes to sleepsacks. The idea of fucking a bottom inside a sleepsack (for which you would need rear access) is a hot idea, but this is quickly shattered by the reality of the bottom being an immobile “plank” and the zipper irritating the top’s dick. Second, lying on a zipper can be very uncomfortable, especially when the runners are poking you in the back. Finally, getting into a rear-zipper-sleepsack with arm pockets is a pain in the ass. The rear zipper comes with a cleaner look but in my opinion is not worth the disadvantages which comes with it. For a little surcharge you can get the opposite access zipper added to your sleepsack too.

As already implied, the Libidex Bondage Sleepsack is equipped with arm pockets which are really well designed. They open up deep enough inside the sleepsack to allow people with thick chest and shoulder muscles to comfortably get into and stay in them. Furthermore they are really deep so people with long arms do not have problems. 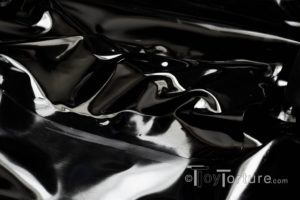 Detail of the Sleepsack’s Arm Pockets

The Bondage Sleepsack (like all Libidex sleepsacks) is made out of 0.8mm rubber. This thickness is a good compromise of sturdiness yet flexibility and stretchiness. The material stretches just enough for easy getting and staying in but still has enough compressing force for the compact, encapsulating rubber bondage feeling. The seams are glued really well and with enough of an overlap to take a bit of beating. In combination with the material thickness, this model can contain a somewhat active sub. But keep in mind that rubber is not nearly as strong as leather! When fettering a bratty sub or going for a painplay scene where the sub will work out the pain, I highly recommend either getting (rubber) belts or tie rope around the sleepsack.

To help keep these means in place, the sleepsack is equipped with welded D-rings with an inner width of 35. Along the side there are four D-ring paris: Above the elbow, over the wrists, above the knee and around the ankles. There is a pair on top of the shoulder, one pair on the collar and finally a single D-ring at the bottom of the feet. The D-rings are attached to the sleepsack using a 30mm wide strap of rubber which is reinforced with a 15mm wide strap of fabric striping. Through this striping there are two rivets on each side which are covered by rubber patches in the inside. This is not only good for potential allergy reasons but the sweat and other liquids accumulating inside the sleepsack would cause rust. As sturdy as the D-rings are attached to the sleepsack, as little I would recommend to use the D-rings for limiting a subs movement by tying the sleepsack down onto a bed frame for example. The chances of the rivets being ripped out of the rubber are too high. Better use the rope as an anchor point. 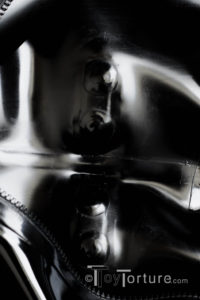 Detail of the Rivet Cover inside the Sleepsack

Finally, a word in the customization options for the sleepsack: You can choose from 43 colors and sizes ranging from XXS to 4XL free of charge with is the largest selection of colors and sizes I have come across yet. Furthermore there are three length options. I have gotten the tall for being around 1.88m tall and it fits me really well – as well as some of my guests which were as tall as 2.05m.

Playing with the Bondage Sleepsack

While this rubber sleepsack can be used to fetter a sub for pain play, the limitations above apply. When you have an active sub and are not a big fan of additionally wrapping rope, belts or chains around a sub, I recommend getting a leather sleepsack (or if you are a rubber fetishist, get both and layer up).

After having gotten that out of the way, let’s talk about the great sensual quality of a rubber sleepsack. Unlike leather, the rubber stretches and flows over the body like a second skin. This has made the rubber sleepsack the favorite piece of bondage for floaty bondage scenes with my subs. With 0.8mm the material is just thin enough to transmit the light touches of fingers traveling over the body. But the material also picks up movement from a strong massager, causing the latex cocoon to resonate around the application area for a unique feeling. Add to that the temperature conductivity of rubber and an ice cube of metal implement warmed in water can create become a tool on the brink between ecstasy and agony. Though NEVER pour wax over rubber or apply hot, sharp or spiky implements! It will damage the material. Since rubber is non-breathable and despite the good temperature conductivity contains warmth, temperature control and hydration (due to sweating) is a constant issue. Make sure that the room is well heated but not too warm, opening a window with a light breeze going over the bound boy can quickly make him become hypothermic. On the other end of the temperature scale, letting him lay in the sun will make him overheat. All these factors have to be taken into consideration when planning the scene because one inside the sleepsack, moving the bottom is difficult. And getting into a sweat-drenched cold rubber bag is a fetish some very much enjoy but not many. 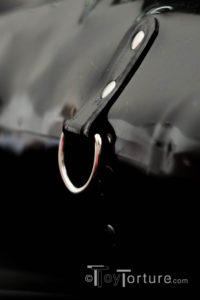 Detail of the Rubber Stripes Holding the D-rings in Place

Rubber is also a good isolating material. I had great fun teasing a sub with a violet wand electrode running over his body, coming closer or moving away from his exposed genitals and alternating the wand’s intensity, so he never knew when the spark would jump over to his dick. When doing this kind of play, be careful with coming too close to the metal zipper which also conducts and can cause interesting effects…

Since the seams are glued really well, the rubber bondage sleespack is basically one big tub which of cause can be filled with liquids. This starts with dropping an ice cube or two against overheating, continues over the ability to relieve oneself during long-term bondage and ends in being the party urinal when the courtesy piss bottom cannot swallow quickly enough (or being the drain for him). While you can fit almost every smaller body type into even a larger and taller sleepsack, when playing with liquids the body fit should be roughly the one ordered. Otherwise the liquids will flow out of the neck opening. 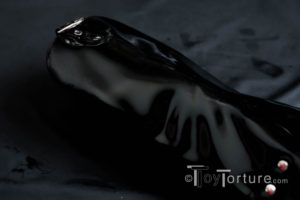 Detail of the Feet Section of the Sleepsack

When talking about messy things, I have to talk about the biggest pain in the ass with rubber items:  Cleaning and maintenance. You can and have to clean the bondage sleepsack like every rubber item (as described in my Rubber 101). The weight and size makes handling the sleepsack a bit clumsy and due to the attached feet section, getting all liquids out before and after the wash is a bit difficult. Polishing the sleepsack takes a while just as applying talcum in the inside (never forget the arm pockets). And finally, the sleepsack should be stored hanging best to avoid creases. Despite all the hassle, I was surprised how often I use the rubber bondage sleepsack.