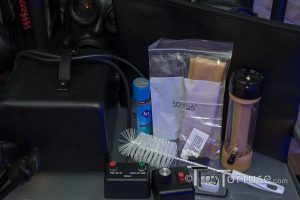 The Venus 2000’s main element is the black milker unit itself which houses the vacuum pump. It is made out of a black, slightly textured polymer, measures 240x155x208mm and weights just short of 5½kg. On top there is a handle for “easy” carrying. At the back of the milker there are two ports for the controls: The rotary control to adjust the speed between 8 and 300 strokes per minute and the air control for increasing or decreasing the air pressure inside the receiver which determines how intense the strokes can be felt and how securely the receiver stays on the sub. Both are connected through a 1200mm long cable resp. hose. Also on this panel you plug the power cord in and connect the milker with the receiver using a 1200mm hose. 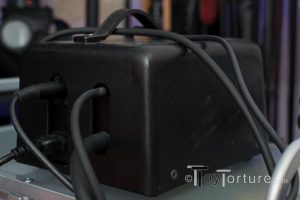 Detail of the Back Panel of the Milker Unit

Besides the machine itself and the control boxes each Venus 2000 comes with one made to measure receiver. Having a custom fit receiver is the basis for an effective milking because it is not too loose or too tight. A bit of leeway is not a problem though. If you – like me – are often entertaining different dick sizes, VenusForMen can help you with a set which covers the most common dick sizes. However, if you have got a regular play partner, making him bring his own custom receiver is a good idea. The receiver is made out of a transparent polymer and outfitted with a rubber liner. The tube’s top end is sealed with a black vinyl cap which is outfitted with a security valve. Close to the bottom is a short brass duct to connect the receiver with the milking machine. When not in use and especially when cleaning the receiver, the duct should be covered by a black vinyl cap to keep moisture and dust from entering the receiver.

Each receiver you order comes with a 76cm long spare liner for replacement. The Venus 200 package also consists of a cleaning brush, 130ml of water-based ID Glide, the power cord and a little black zipper bag for storing all the accessories. 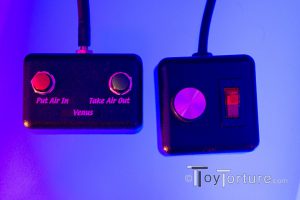 The Venus 2000’s Controls: Left for the Pressure inside the Receiver, Right Power Switch and Stroke Control

Besides the Venus 2000 I also got the Head & Nipple Massager Set. It consists of two 80mm tall receivers with a diameter of 55mm. along with two 300mm long hoses and a T-connector for connecting both receivers to the main suction hose.

Playing with the Venus 2000

The bad news first: The Venus 2000 is not an “easy out of the box fun” toy. Setting it up the Venus itself only takes a minute: Plug in the power cord and the two controls, connect the receiver with the milker unit, lube up the dick and the inside of the receiver and bit and you are ready to go – theoretically. Practically I find it impossible to adjust the air pressure inside the receiver just so that it stays in place while jerking. There are different ways to keep it in place; I have seen rope or bungee cords in combination with TPR cockrings or different tripod accessory layouts (I use the one YngMstrDetroit developed for his playroom). Once it is setup for play, you run into a bit of a problem when you are uncut: The receiver will inevitably pull your foreskin back which the majority of my testee panel – including me – found uncomfortable and made it harder to come. If you know a way to keep the glans covered when using the Venus, please write me an e-mail! Furthermore despite being compact, it is quite heavy so especially when you air travel it is not a toy you lightly take with you. 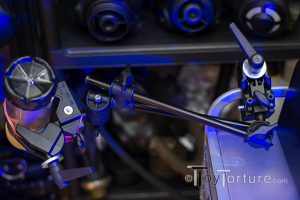 As a milking toy, the Venus 2000 is a bit like E-Stim: It takes practice. Only few of my testees who have never been connected to a Venus 2000 came during the first scene. It takes some time to figure out which is the best receiver size (if they don’t have their own custom one), how much air pressure needs to be in the tube for optimal stimulation and which stroke speed is the most effective. When it comes to stroke speed, it is an urban legend that more is better. The sensation of the receiver on the dick can be so intense that a quick stroke speed can overexcite the nerves and the sub doesn’t feel anything anymore. So especially for the first two or three milking scenes is to bound the sub comfortably and blindfolded so that he can focus on the milking sensation, get used to it, struggle against the building tension and ultimately give in to one, two or even more orgasms. If you want quick results, additional stimulation like e-stim, vibration on the taint or hypno files are a good thing. Once the sub has learned to climax through the Venus 2000, the fun game of keeping the just on the edge for hours until he loses his mind or making him cum over and over until his dick is sore. 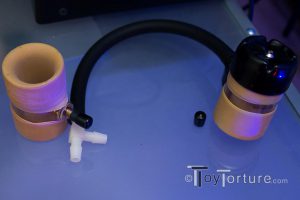 Of cause there are also kinksters at the other end of the spectrum: People who cum very quickly. I had subs who managed to come within the first minute and then another three time within the next half hour! Scene after scene it became harder for him to shoot so the Venus 2000 actually helped desensitize him a bit. Another testee has problems getting and staying hard. Because the Venus sucks merciless he could reach some quality orgasms with it. Sadly he lives quite far away so we could not look at long-term effects. He actually got himself a used Venus 2000 and now works on his condition. In his experience using the receivers without the liner is more effective because the vacuum pulls directly on the dick like a vacuum pump (I personally prefer the more controlled suction of a dedicated penis pump with more comfortable cylinders). I will update this post in half a year or so to see if regular improves his condition.

A really fun accessory for the Venus 2000 are the Head & Nipple Massager Set.  Especially when you “prime” the nipple with a vacuum pump to be extra sensitive, the waves of suction are fun, especially as a constant stimulation during sensation play. A single massager can be used on the dick in actually two ways. Either with the cap on, just massaging the glans. I found this focused stimulation of the dick’s part with the highest nerve ending density a very effective way to “teach” the dick the Venus stimulation. Also, the shaft is exposed for all kinds of play like way or e-stim just to name two. With the cap off, the massage can be administered along the shaft, leaving the glans exposed to many deviant ideas: Head polishing, sounding, e-stim or adding a massager with a head attachment. 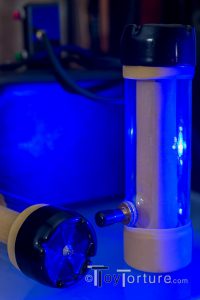 Finally a word on the lubes you should use with the receivers. VenusForMen recommends only water-based lubes. I will add that slicker ones like the ID Glide which comes with the toy or Elbow Grease H2O Thick Gel work better then thinner ones like Swiss Navy because the thicker will stay in place. Finding the right amount of lube takes practice. Use too little and the milking will not be comfortable enough for the sub to climax (entering the realm of CBT…), use too much and the receiver can pop off too easily. In any case you should relube regularly. In the manual VenusForMen advises against using silicone and oil-based lube. While oil-based lube destroys the liner, you can actually use silicone lube if you are careful. Use only little and don’t distribute it too generously because the cap at the top only stays in place through friction. If silicone lube gets between the cap and the liner, the pressure inside the liner will be strong enough to make it pop off. Once silicone lube has gotten there, it is a pain in the ass to get every last bit cleaned up so the cap sticks again.